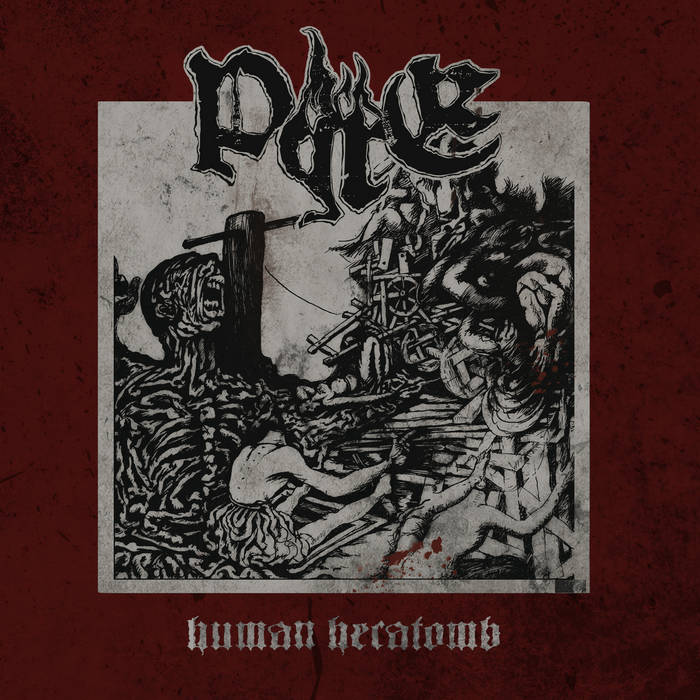 Fraz This is perfect for scratching that old school itch. Seems to be released in full a month earlier than stated. Bonus. Most of the album is stellar, some filler towards the end.

"The album is an exercise of well-tempered death metal, that is at once caustic and mesmerizing. The songs are catchy, crusty, even imbued with doomy and melodic bits and include influences of bands such as Asphyx, Dismember, Comecon, Morgoth, even Death and Edge of Sanity."
- Bravewords & Bloody Knuckles
bravewords.com/news/russias-pyre-to-release-human-hecatomb-album-in-october-merciless-disease-track-streaming

"Sonically, this track [Merciless Death] is a pretty standard portrayal of death metal and crust punk, but the songwriting and performance are just too awesome to disregard. The band has guts; there's no debating that! It's like they've somehow managed to indulge in some musical nostalgia while actually conjuring the excitement I get from listening to bands that were kingpins in the era of music that so obviously influences Pyre."
- The Needle Drop
www.theneedledrop.com/articles/2014/09/pyre-merciless-disease

" If you ever wanted a more violent sounding Dismember circa the Like An Ever Flowing Stream/Pieces era (along with a touch of thrashiness), then this is for you. "
- NO CLEAN SINGING
www.nocleansinging.com/2014/09/08/what-im-listening-to-this-year-part-3/

"You’ll find that Pyre puts more stock in the heavy mid-paced stomp than Dismember or Unleashed did. In classic albums like Where No Life Dwells, those bangers were held in reserve and unleashed sparingly. When they did pop up, they packed a serious punch. Here, they’re pretty much everywhere. While some of that novelty is lost in the glut, the riffs are so well-designed that it’s essentially a non-issue. When you hear the ones in “Flesh to Poles” and “Cursed Bloodline,” you’ll scowl, nod in appreciation of adept riffcraft, and wish they lasted forever. There’s still plenty of tremoloblasting and doomy, Autopsy-borrowed dirges to balance them out, often overlaid with the reverbed-out, slithering-entrail leads reminiscent of fellow revivalists Repugnant.
Dym Nox’s vocals are just what the doctor ordered, generally switching off between channeling the aforementioned Van Drunen and a more deranged, phlegm-spewing Chris Reifert. His voice is an effective vehicle for the delivery of those catchy old-school choruses directly to your brain, to which they’re bound to cling like a viscus slime. “Merciless Disease,” “We Came to Spill Thy Blood,” and “Disturbia” take you back to a simpler time, when you could buy a candy bar for a quarter and death metal choruses were just the song title growled repeatedly over a filthy riff."\
- Toilet ov Hell
www.toiletovhell.com/review-pyre-human-hecatomb/

"You wouldn’t bat an eye if you were told that this was a re-issue of an unearthed ‘90s classic (ditto for the artwork). Kudos though for tossing some audible bass once in a while (see the opening of “Merciless Disease”). What does keep Pyre ever so slightly above some of their brothers in arms is the fact that these tunes, despite their familiarity, really work. As previously mentioned, it sounds like a classic, not a second-tier offering. Pyre knows how to roll with the driving riffs (“Far Beyond the Unknown”) and melodic soloing and leads. The grooves are infectious (“Under the Death Reign”) and they aren’t afraid to slow down the pace either (“Possessed”)."
- Dead Rhetoric
deadrhetoric.com/reviews/pyre-human-hecatomb-chaos-records/

"Pyre is a relatively recent incarnation. Originating in 2012 in St. Petersburg, Pyre is best known for their 2014 full length, Human Hecatomb. Pyre are a blend of death metal and crust. Their thick, unweilding sound is infectious. Including members of Blazing Rust, Chamber of Torture and Internal Damage, Pyre are a force to be reckoned with. Further, their sound is not what is normally expected from the Russians. Rather, their sound is more in line with the great, crusty death metal legends of Finland."
- Nine Circles
ninecircles.co/2015/10/13/nine-circles-ov-russia/

" "Human Hecatomb" is a death metal album that often refers to heroes like Dismember, Asphyx, Unleashed or Grave. These are the starting points with old names. In contemporary bands you can also compare Pyre with bands like Tormented, Bastard Priest or Verminous."
80/100
-Lords of Metal
www.lordsofmetal.nl/nl/reviews/view/id/28050

"This album is 9 songs of madness, true straight to the point Death Metal that so many bands do, so what makes these guys stand out you say? Well I'll give you what I've gathered and you can decide for yourself if they stand out enough to check out. Continue reading if you like bands like DEATH and more appropriately, OBITUARY. "
- Metal-Temple
www.metaltemple.com/site/catalogues/entry/reviews/cd_3/p_2/pyre-human-hecatomb.htm

"This is Old-School Death Metal with swagger, confidence and a feeling of grim determination mixed with a sense of graveyard fun."
- Wonderbox Metal
wonderboxmetal.com/2014/09/30/pyre-human-hecatomb-review/

"There is not a bad song on this album and in fact, as you are likely to find out, it proves very difficult in picking out particular moments of death metal awesomeness from an evil host of so many. Furthermore, a good job has been done in laying the recording down of Human Hecatomb and it provides for nice continuity and flow between songs. But, if your insides aren’t turning rancid within the four and a half minutes of the opening track, then rest assured that the sheer horror of “Flesh to Poles” and the epically punishing “We Came to Spill Thy Blood” will do the trick."
- The Metal Forge
www.themetalforge.com/reviews/4334

"Pyre‘s Human Hecate is old school Swedish death metal as it should be – filthy, abrasive, loud and aggressive. Any fans of the old school will certainly find this release a charming, enchanting piece of work."
- Heavy Metal Tribune
www.heavymetaltribune.com/album-review-pyre-human-hecatomb/

"Now I know why this Russian band was in everybody’s mouth last year. For moments European death metal scene needs a new entity, for scratching the whole basement, and there you have it. This is pure fucking death metal full of violence, ominous melodies and a Swedish taste in blood."
- Zombie Ritual Zine
zombieritualzine.wordpress.com/2015/01/14/pyre-human-hecatomb-review/

"If Grave or Entombed released an album tomorrow and this was it their fans would have every right to celebrate. This may not quite be a Clandestine or a You’ll Never See… but it’s about as close as it gets these days. Fantastic."
- The Metal Observer
www.metal-observer.com/3.o/review/pyre-human-hecatomb/

"...the band captures a time portal to the great music at the beginning of the death metal genre, all the elements that make the genre amazing can be found in each and every composition herein.
I recommended it to fans of early Death, Monstrosity, Slayer, Wrath, Embalmer, Dismember and Obituary. Also the next generation can also benefit from checking this out to hear how raw and intense DM can be without being super polished or complex."
- Arte Mortifica Reviews
artemortificareviews.blogspot.com/2014/09/pyre-human-hecatomb.html

"PYRE was Able to give on CD the atmosphere of the old cemetery. Such a true old school death metal greeting from the grave I did not expect. Great!"
- Deadly Storm
deadly-storm.blogspot.com/2015/01/recenzereview-pyre-human-hecatomb-2014.html

"Playing with gusto, Pyre comes from Russia, and man, they know how to create good old school lullabies for the old timers of the cult of death out there!"
- Dark Should United
darksoulsunited.wordpress.com/2015/03/20/pyre-human-hecatomb-chaos-records/

Bandcamp Daily  your guide to the world of Bandcamp